Power Showrunners and i-Poppin Praise: LA Times says Lizzy Caplan gets "rave critical notices as a character not even Shakespeare could have envisioned" -- Ahhh, the Bard! And we were aiming for Bernard Shaw's 'Pygmalion!'

The Los Angeles Times offers up a wonderful portrait of Lizzy Caplan and, at least to these unbiased eyes, manages to liken "Masters of Sex" to Shakespeare! How's THAT for eye-poppin' praise!

As the LA Times reports: "Now, she's earning rave critical notices as a character not even Shakespeare could have envisioned. In "Masters of Sex," she plays Virginia Johnson, one half of the famed sex research duo Masters & Johnson, whose 1966 tome "Human Sexual Response" became an unlikely bestseller, shattered myths about the female orgasm and helped ignited the Sexual Revolution. The drama, based on Thomas Maier's 2009 book of the same name, opens in 1956, the year that Johnson, a twice-divorced single mother, was hired as a secretary for William Masters (Michael Sheen), then a prominent gynecologist at Washington University School of Medicine in St. Louis. Though she lacked medical training or even a college degree, Johnson quickly became an invaluable collaborator and, later, his wife.As embodied by Caplan, Johnson is a woman well ahead of her time, at once sexually liberated and emotionally closed off." 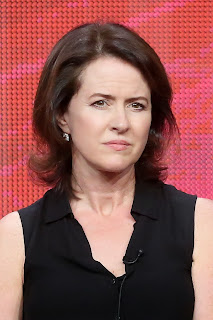 Congrats to Lizzy on a well-earned plaudit. And speaking of eye-popping praise, many congrats to Michelle Ashford who is at the top of the list of The Hollywood Reporter's "Power Showrunners To Watch For In 2014." As THR says: "Matching Homeland's promising 2011 launch with 1 million viewers, Showtime's period drama about real-life sex researchers Bill Masters and Virginia Johnson earned the rare distinction of improving in its second outing -- by 9 percent -- and grossed a premiere audience of 5.6 million viewers."

It's nice to be popular.