Getting to Know Virginia Johnson in "Masters of Sex" -- A Woman of Her Times? Asks The New Yorker 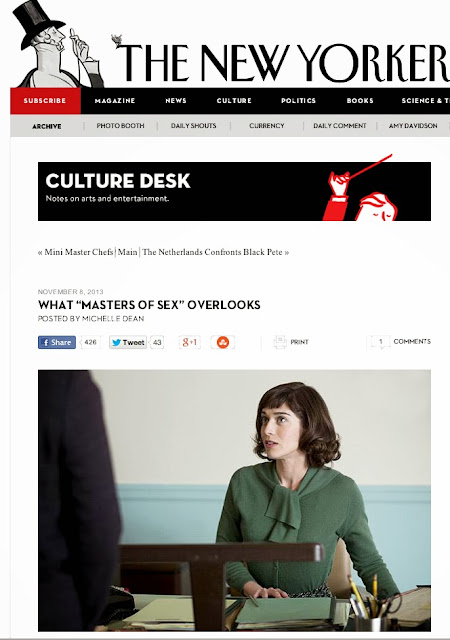 It’s surely fun to compare my book, “Masters of Sex,” with the Showtime dramatic series adapted from it, both for the similarities and differences. I don’t believe in spoiler alerts -- (after all, I learned Citizen Kane died in the first scene of my favorite movie) -- so I’ve encouraged folks to consider my book as a wellspring of ideas for the TV show, rather than a creative straightjacket. In her own comparison, Michelle Dean of The New Yorker's Culture Desk blog wisely underlines what her impressions are “so far”. But I think she might be a bit unfair to Showtime’s “Masters of Sex” at this midway point of Season 1 by coming to conclusions about the Virginia Johnson character too quickly.


Back in the 19th Century, writer Charles Dickens often serialized his novels chapter by chapter, adapting and rewriting some of the action and characters along the way, based on the public’s initial reaction. Today books are usually reviewed only after they are completed --  judged as whole works, rather than episodically or on the fly.
But the new Dickens are TV “showrunners” --  writers like Michelle Ashford of “Masters of Sex” and Matthew Weiner of “Mad Men” -- who aren’t afforded such a luxury. Each week brings a new analysis by critics and a little impatience by the audience before a character is fully drawn.
The character of Virginia Johnson played by Lizzy Caplan will undoubtedly transform before our eyes as the series unfolds. Like some modern-day Pygmalion tale, she goes from a lowly down-on-her-luck secretary desperate for a job in 1956, to a world-famous sex researcher hailed in a 1970 Time magazine cover story for her insights about human intimacy. But right now in this TV saga, it’s important to note that Virginia’s honest, candid comments about sex are made only to other women in similar lowly jobs like herself. Or to Bill Masters -- and only when they are alone together -- because the doctor is desperate for Johnson’s help as a female associate so he can continue his wildly ambitious sex study.
Up to this point, others doctors in the series, both male and female, dismiss or ridicule Virginia for any comments she might dare to make. In the pilot, when Virginia momentarily bursts with excitement about M&J’s scientific findings, the university provost played by Beau Bridges ignores her and turns angrily to Masters. “Why does your secretary keep talking to me?” demands the provost, as if Virginia didn’t even exist. The seemingly ‘liberated’ comments that Virginia makes privately to Masters in the series were really the matter-of-fact insights of a twice-married woman who grew up on a farm with all that animal husbandry on display. She was rewarded in their work by Masters for her candid insights about female orgasm and other mysteries essential to the doctor’s success with their study. Yet, from their very first encounter in the pilot, Lizzy Caplan’s character admits to Masters that her independent-mindedness about sex was not something she trotted out at dinner parties.

In my interviews with her, Johnson often underlined the duplicity of 1950s ‘good girls’ in St. Louis who played the game of Midwestern propriety, but made their own choices just as she did.
“There were a fair number of women who were sexually active, but the ‘nice’ girls -- the ones who were so labeled, of which I was too, for that matter -- a lot of them were not,” Virginia explained early in my book about this era.
The private sexual relationship between Masters and Johnson is particularly difficult to categorize easily. But it’s unfair to use my book to suggest the show treated Masters’ request to have on-the-job sex with Johnson as anything but a serious matter. The show does indeed reflect the book’s account by Johnson that she was stunned by Masters’ request, and the pilot ends on that very dramatic note. As the series continues, though, we will see Masters and Johnson’s private relationship change dramatically from that dismal beginning to one that becomes a remarkably equal working partnership and an eventual marriage between them.
Were these two ever really in love? All this sex talk obscures, I might suggest, a deeper truth about “Masters of Sex”. The heart of Masters and Johnson’s own story is about the elusiveness of love. For all of their studies about the “how to” of intimacy, Bill and Gini had a hell of time letting each other know how they felt personally. There were fascinated with each other, like two batteries both attracting and repelling. Even after Johnson gained a co-byline with Masters on their heralded books, even after they shared equally in their worldwide fame and glory, and even after they married for twenty years, Masters and Johnson seemed clueless about love. Particularly in this sense, their story speaks to the state of relations between men and women in our modern era.
Of course, I’m delighted Michelle Dean let the spoiler alerts be damned and read my book. It’s always fun to compare a drama with its real-life inspiration. So far, I think the show has been remarkably true to the spirit -- and often the details -- of my biography. But let’s give the TV writers of “Masters of Sex” more time to reveal the very complex character of Virginia Johnson. 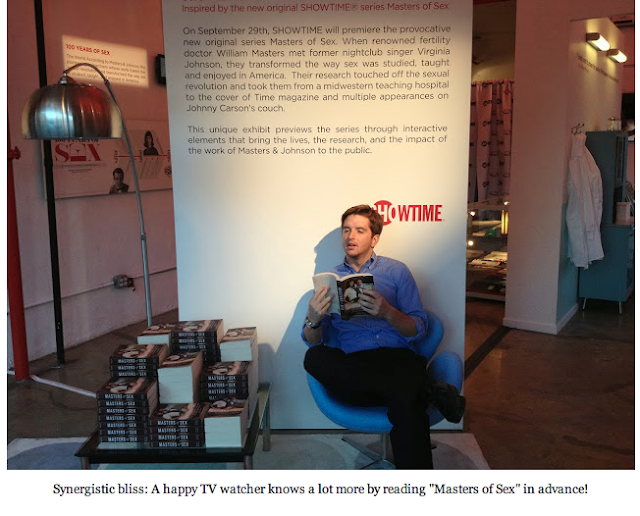 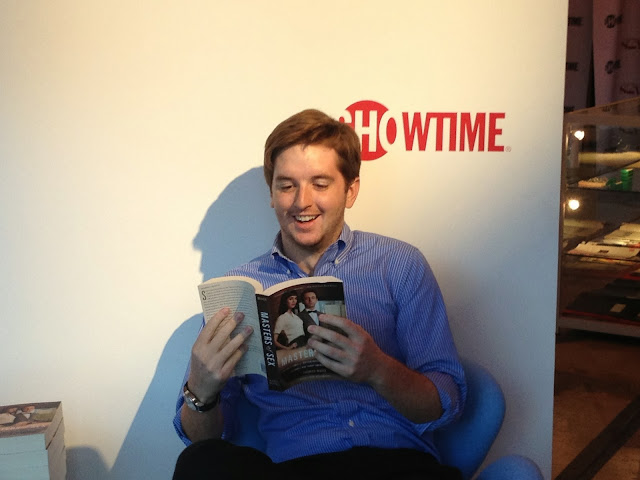