"Gripping" is the 'Masters of Sex' book, says Guardian, comparing to TV show now shown in UK. Calls Masters and Johnson a "A Biological Romance". 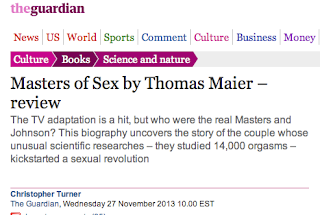 The Guardian in London offers a new review of the book and some comparison with the TV series. Here's a quick excerpt:

"Maier's gripping biography, first published in 2009, is essentially a biological romance. In 1971, the research duo got married and were held up as paragons of the virtue of a healthy marital sex life. Despite their celebrity, Johnson described the couple as "absolutely the two most secretive people on the face of the Earth". Maier, who interviewed both at length, keeps us within the cloistered, claustrophobic world of their sex research institute, and the book consequently has a concentrated energy. Masters of Sex has been reissued to coincide with the excellent TV adaptation of the same name, a medical Mad Men in which Johnson is played by Lizzy Caplan and Masters by Michael Sheen. His Don Draperish secrets are paternal abuse and a low sperm count."