CHURCHILL URGED US TO 'WIPE OUT' MOSCOW WITH A-BOMB: Except from "When Lions Roar: The Churchills and the Kennedys," in the ICIJ website 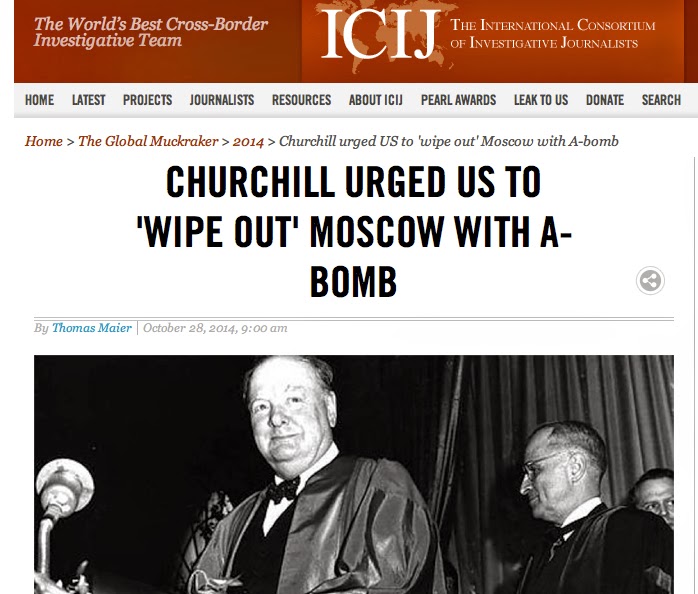 Senator Styles Bridges.Privately, Churchill suggested that America strike first, before it was too late. According to FBI records, he urged Sen. Styles Bridges, a conservative Republican from New Hampshire active in foreign affairs, to back a preemptory and devastating attack on Moscow. “He [Churchill] pointed out that if an atomic bomb could be dropped on the Kremlin wiping it out, it would be a very easy problem to handle the balance of Russia, which would be without direction,” Bridges told the FBI.
During a “private conference with Churchill” while visiting Europe in the summer of 1947, Bridges claimed the former prime minister had “stated that the only salvation for the civilization of the world would be if the President of the United States would declare Russia to be imperiling world peace and attack Russia.” If this wasn’t done, according to the FBI report dated December 5, 1947, Churchill predicted “Russia will attack the United States in the next two or three years when she gets the atomic bomb and civilization will be wiped out or set back many years.”
A full-fledged nuclear attack on the Kremlin didn’t seem to faze Bridges, who’d been a sharp policy critic of Roosevelt and Truman. Bridges mentioned this conversation with Churchill only while talking to a G-man about “other matters,” according to the agent who compiled the report. It noted that Bridges “concurs in Churchill’s views and that he sincerely hopes that our next President will do just that before Russia attacks the United States.”

Click to read the FBI document on Churchill.
Others close to Churchill heard similar bellicose sentiments. His personal physician, Lord Moran, recalled that Winston advocated a nuclear knockout blow against the Soviets during a conversation in 1946. “We ought not to wait until Russia is ready,” Churchill said. “America knows that fifty-two percent of Russia’s motor industry is in Moscow and could be wiped out by a single bomb. It might mean wiping out three million people, but they [the Soviets ] would think nothing of that.” Winston paused and smiled as he thought of this grotesque. “They think more of erasing an historical building like the Kremlin,” he added.
A few years later, before Churchill gave a Boston speech, Averell Harriman warned U.S. State Department officials that his old friend might make “politically embarrassing statements,” urging aggressive use of the atomic bomb as a negotiating stance against the Soviets. Undoubtedly remembering Truman’s retreat at Fulton, Harriman suggested that the administration get an advance look at Churchill’s address. Inside a crowded Boston Garden, Churchill didn’t call for an attack on the Kremlin but condemned the Soviet Politburo as “something quite as wicked but in some ways more formidable than Hitler.” He reprised his “Iron Curtain” warnings and portrayed the atom bomb as Western democracy’s most potent weapon. “I must not conceal from you the truth as I see it,” he said in a speech offered on television as well as a radio. “It is certain that Europe would have been communized, like Czechoslovakia and London under bombardment sometime ago, but for the deterrent of the atomic bomb in the hands of the United States.”
Since his days watching the sword-wielding Dervish warriors slaughtered on the hills, Churchill had understood the supremacy of machinery in war, over the courage and glory of individual soldiers. Some were surprised by his callousness about such butchery. “War has always fascinated him; he knows in surprising detail about the campaigns of the past captains; he has visited nearly all the battlefields and he can pick out, in a particular battle, the decisive move that turned the day,” Lord Moran wrote in his diary. “But he has never given a thought to what was happening in the soldier’s mind, he has not tried to share his fears. If a soldier does not do his duty, the P.M. says that he ought to be shot. It is as simple as that.”
At Boston’s Ritz-Carlton before that night’s speech, Winston chatted about the atomic bomb with his longtime American friend Bernard Baruch—who later introduced him to the crowd as “the greatest living Englishman”—and with family friend Kay Halle. By his side were his wife, Clementine, and son, Randolph, seated at a circular table holding teas, buttered scones, sandwiches, and Scotch whiskey. Winston mentioned that in the New Mexico desert site, where the first Trinity bomb had been ignited, a monument was being built in memory of those who died at Hiroshima.
“Do the Americans have a bad conscience because the atom bomb was dropped?” he asked.
Kay Halle remembered Winston’s “unblinking X-ray eyes” as he stared at her, looking for an answer. Kay was now an accomplished woman in her midforties and far different from the fun-loving blonde-haired department store heiress from Cleveland whom Randolph wanted to marry nearly two decades earlier. Since then, she had worked as a broadcaster, a newspaper feature writer, and for the Office of Strategic Services, the wartime predecessor to the CIA. Though Kay revered the former prime minister, she was confident enough to give an answer he might not want.
“Very many,” Halle replied, about the number of Americans who felt guilty about this nuclear holocaust.
Winston dismissed such claptrap, arguing that the A-bomb posed “the only deterrent to the Soviets.” He showed little patience with those who asked if he worried what God might say about the atom bomb. “I shall defend myself with resolution and vigour,” he argued, as if the Gates of Heaven might resemble the well of the House. “I shall say to the Almighty, why when nations were warring in this way did You release dangerous knowledge to mankind? The fault is Yours—not mine!” Yet in private, Churchill seemed disturbed by the moral consequences of this new warfare and wondered if its true meaning might be beyond his grasp. “Do you think that the atomic bomb means that the architect of the universe has got tired of writing his non-stop scenario?” he wrote George Bernard Shaw. “The release of the bomb seems to be his next turning point.”

Publicly, Randolph supported his father’s Fulton speech about the Soviet “Iron Curtain” and his firm resolve against communism in Eastern Europe. But in their private conversation in Boston, Randolph, always able to find his father’s weak spot, suggested that British “saturation bombing” of Germany during the war “was an almost equal horror” to Hiroshima, Halle recalled. Aerial bombs from Allied planes obliterated cities such as Dresden, Hamburg, and Cologne, reducing them to rubble and flames. To his family and friends at this Boston hotel, Winston recalled his moral reservations about these raids in which “tens of thousands of lives were extinguished in one night . . . old men, old women, little children, yes, yes, children about to be born.” Kay watched her hero speak with true humanity, “with tears brimming in his extraordinary eyes.”
From his own experience, however, Randolph knew the Russians didn’t fear that the Americans would strike first with the atom bomb. During a November 1945 visit to Moscow, he heard Soviet officials complain that the United States didn’t share its nuclear technology, but didn’t seem overly alarmed by the “imperialistic purposes” of Uncle Sam. “I asked them chaffingly whether in fact anyone in the Kremlin has lost a single minute’s sleep worrying about whether the Americans were about to drop an atomic bomb on Red Square,” Randolph recalled. “They were all too honest to pretend they had.”
Little did they know his father would drop the bomb if he could.
'Let documents be your guide:' A Q&A with author and ICIJ member Thomas Maier