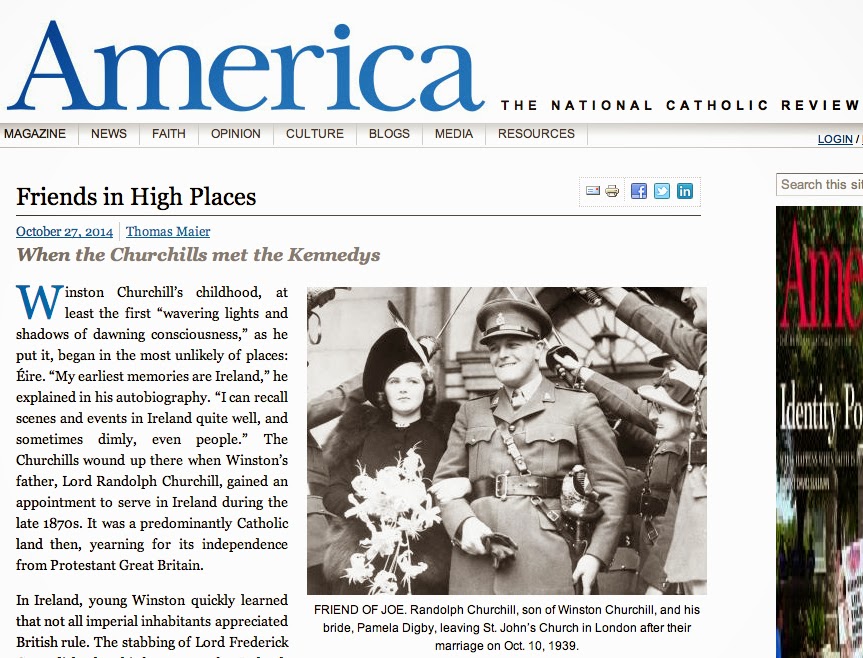 Here's an excerpt from the excerpt:


In private, some of Winston’s view of Catholicism came into play when his only son, Randolph, decided to marry Pamela Digby shortly after meeting her in 1939. Concerned with carrying on his family’s legacy, Winston favored this rather rushed union, quickly put together before Randolph went off to World War II. But Winston did have one reservation, which he posed to Pamela in private the first time they met at Chartwell Manor, the British leader’s home. Pamela remembered seeing Winston come out of his studio, a short distance from the main house, and walk up the grassy hill toward Randolph and his intended bride.
“Your family, the Digby family, were Catholic but I imagine you are not still a Catholic?” he said, looking at her very severely. “Are you Catholic?”
“No, I’m not,” Pamela replied.
The agnostic in Winston, unaffiliated with any church or particular deity, surely did not mind. But the historian in Winston seemed vaguely to remember that the Digbys were Romanists. As a royal monarchist looking for a rightful heir, this possible variance from the Church of England was something he needed to know. He did not want to see religion become an issue. Jack Churchill, Winston’s stockbroker brother, had married a Catholic, and their children were being reared in the Church of Rome. Winston’s inquiry about her religion seemed to carry a slight distasteful implication: that he was part of “the majority of that type of English person who is anti-Catholic,” Pamela later explained.
Pamela assured Winston that he need not worry. She had been baptized at infancy in the Church of England. While their papist affiliation was true centuries before, the Digbys had been Protestants in good standing for years among the peerage, and faithful Conservative Party members, too.
“Yes, you had your heads chopped off in the Gunpowder Plot,” Winston now recalled.
“That is right—Sir Everard Digby,” Pamela replied. (Actually, Sir Everard, converted to Catholicism by a Jesuit, was hanged, drawn and quartered at the Tower of London for his involvement in an attempt in 1605 to blow up the House of Lords and kill King James I.)
Winston appeared relieved. “That being out of the way—that I was not a Catholic—he became very much on our side,” Pamela recalled. “But the rest—Clemmie and my family—were very practical and didn’t think it was a good idea.”
Email Post
Labels: Jackie Kennedy Jacqueline Kennedy JFK John F. Kennedy Randolph Churchill Thomas Maier When Lions Roar: The Churchills and the Kennedys winston churchill