See Photos from "WHEN LIONS ROAR: The Churchills and the Kennedys" by Thomas Maier An Eye-Opening New Look at Two of History’s Greatest Families


When Lions Roar: The Churchills and the Kennedys by Thomas Maier 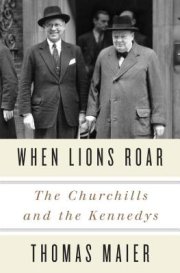 CONTACT:Dyana Messina
(212) 572-2098
dmessina@penguinrandomhouse.com
Advance Praise for WHEN LIONS ROAR
“Writing a biography of an individual can become beset with difficulties. Writing a multicharacter history of both the Churchills and the Kennedys, covering primarily the 1930s through the 1960s, involves an almost unimaginably high degree of difficulty. Maier’s cast of characters includes 14 Churchill family members and 15 Kennedy family members. . . . Most pleasing is Maier’s skill at locating information about less famous individuals who played key roles in the ways the two families connected and disconnected. . . . His research carries the book along as interesting anecdotes continue to emerge.” —Kirkus Reviews
“This sprawling saga of two political dynasties . . . is full of wartime adventure, romance, and innumerable adulteries. Maier’s vivid profiles of these charismatic figures makes for a nuanced study.” —Publishers Weekly
“[A] fascinating dual biography . . . Maier delves into archives on both sides of the Atlantic to bring to his narrative an impressive grasp of the two clans and the rich array of personalities that interacted with them over the decades. This is a book that cannot be put down, and its wealth of details, smoothly told, will hold the reader’s attention from beginning to end.”—Library Journal

Winston Churchill, John F. Kennedy, and their families have long been the subjects of endless fascination and intrigue. But never before has there been a sweeping study of the long and emotionally complex relationship that existed between these two families—and its profound effect on history. Drawing upon newly discovered documents for WHEN LIONS ROAR: The Churchills and the Kennedys (Crown; October 28, 2014), celebrated biographer Thomas Maierprovides a fresh perspective on the many previously unknown dealings between the two families. In a brilliant, epic account spanning four decades (1930–1970), Maier brings new understanding to the private and public encounters between these two political dynasties. By examining the family patriarchs, their famous sons, and the extraordinary women in their lives, Maier reveals how each influenced the other—particularly Winston’s influence on JFK—and how, in ways few recognize, that influence helped to shape the futures of both Great Britain and the United States.
WHEN LIONS ROAR begins outside London with a secret 1933 meeting between Winston Churchill and Joseph P. Kennedy’s entourage, including President Roosevelt’s oldest son—all part of Joe’s bold scheme to import British liquor just as Prohibition in America is ending, worth millions to the Kennedy fortune. Surrounding this deal, Maier reveals for the first time how Churchill obtained a lucrative amount of stock in two American companies controlled by Kennedy and his associates. From that friendly arrangement unknown to history, Maier traces the parallel tracks of these remarkable families, who went on to shape the most tumultuous years of the twentieth century. They became tragically divided over America’s entry into World War II. Yet as two of the world’s most powerful men, Prime Minister Winston Churchill and President John F. Kennedy—and their families, friends, and many associates—saw their lives intersect ever more deeply. By the 1960s Cold War, a second generation of Churchills and Kennedys (Winston’s son, Randolph, and JFK and his brother Robert Kennedy) became friendly, with important characters like Aristotle Onassis, Pamela Churchill Harriman, and especially Jacqueline Kennedy, propelling this saga. At its heart, WHEN LIONS ROAR examines “great men” desperate to leave their mark on the world and to see their legacies carried on by their sons. Both the Churchills and Kennedys tried to harness what Maier describes as the “blood, brains, and passion that drives family dynasties from one generation to the next,” but with dramatically different results. WHEN LIONS ROAR explores the strained relations between Winston and his once-promising son, Randolph, and chronicles how Joe Kennedy overcame his own failures as a politician to create an American powerhouse.
In this masterful biography, Maier sheds new light on these two great political families and the remarkable connection that existed between them—from friendly acquaintances to embittered wartime antagonists, and finally to postwar admirers paying tribute—while illuminating the impact of that relationship on the course of Western history. WHEN LIONS ROAR rewrites the history between these two families, becoming an exceptional and important new addition to the canon of Kennedy and Churchill literature.