What's New in WHEN LIONS ROAR: The Churchills and the Kennedys? Plenty and Here's the List of What You'll Learn 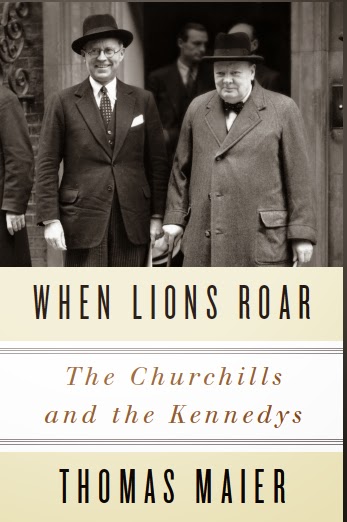 In WHEN LIONS ROAR: The Churchills and the Kennedys (Crown; October 28, 2014), author and historian Thomas Maier examines, for the first time, the long-standing relationship between the Churchill and Kennedy families, bringing to light a number of surprising and previously unknown items, including:

Questions surrounding the liquor-stock deal involving Joseph P. Kennedy (father of the future U.S. president), James Roosevelt (oldest son of then-president FDR), and future British Prime Minister Winston Churchill.
As Maier details for the first time, Winston Churchill obtained a lucrative amount of stock in two U.S. companies associated with Joseph P. Kennedy in an apparent “pay to play” arrangement, around the same time Kennedy received British approval to ship Scotch whiskey and other liquor to America as Prohibition was ending. A 1933 London trip by Kennedy and James Roosevelt, the son of FDR and another key figure in WHEN LIONS ROAR, to secure the liquor contracts involved a meeting with the financially troubled Churchill at his estate, Chartwell. Using previously unreleased documents, Maier shows how both Kennedy and Churchill benefitted from this arrangement and how President Roosevelt became alarmed when he learned that his son James was involved in this secret deal.

FBI records show Churchill favored dropping the atom bomb on Soviet Union in the early days of Cold War.
Shortly after World War II ended with devastating atomic bomb explosions in Japan that killed more than 100,000 people, the former British Prime Minister suggested, privately, that the U.S. strike first against the Soviet Union before the Communist-run government developed the nuclear weapon. According to FBI records, Churchill urged Sen. Styles Bridges, a conservative Republican active in foreign affairs, to push for a preemptive and devastating A-bomb attack on Moscow, a recent ally during the war.

The intimate relationship between Kay Halle, a sparklingly blonde heiress, and both families.
A major character in WHEN LIONS ROAR is Kay Halle, the stylish, fun-loving daughter of a Cleveland millionaire who had affairs with both Churchill and Kennedy family members. Behind the scenes, Halle played an important  role in getting Winston Churchill honorary U.S. citizenship from the Kennedy White House in 1963. Maier examines her affairs with Joseph P. Kennedy and Randolph Churchill, the Prime Minister’s only son, and how her influence with both families would extend from the 1930s to 1970s.

How a crucial and underexamined Winston Churchill-John F. Kennedy meeting in 1958 marked the beginning of Jackie Kennedy’s relationship with Aristotle Onassis, the Greek tycoon who managed to manipulate both families.
Despite years of animosity between the families over World War II, Winston Churchill agreed to meet JFK, the would-be presidential candidate, aboard the huge yacht owned by his friend and ardent admirer, Aristotle Onassis. Once aboard, Jackie was shown around the yacht by Onassis while Jack chatted with his boyhood idol, Churchill. Maier details how Onassis exploited his Churchill connections and also recounts Jackie’s growing affection for Onassis in the years before and after JFK’s death.

How a Nazi spy case haunted the Kennedys for years.
Soon after taking office in 1961, Attorney General Robert Kennedy asked FBI Chief J. Edgar Hoover to supply him with the case file against WW II spy, Tyler Kent. As Maier recounts, Kent was convicted in 1940 of stealing correspondence between Winston Churchill and President Roosevelt from the American embassy in London where he worked under Ambassador Joseph P. Kennedy--information which later wound up in the hands of Nazi spies. Kennedy was mortified by the huge security leak and apparently knew nothing of Tyler. But records cited in WHEN LIONS ROAR show that the British feared Joe Kennedy, a notorious appeaser, might be involved in Kent’s plot and actually kept a dossier on Kennedy both in England and upon his return to America. Letters from Lord Beaverbrook, a close friend of both Winston Churchill and Joe Kennedy, underline the Kennedy patriarch’s lasting concern with that spy case and the Kennedys’ perpetual worry that the Kent fiasco could result in a political black eye. Twenty years later, the FBI acted quickly to please Robert Kennedy by providing the secret spy file on Kent as soon as he took office as the nation’s top prosecutor.

New, never-before-published letters from Jacqueline Kennedy
WHEN LIONS ROAR quotes, for the first time, several never-before-published letters from Jacqueline Kennedy, provide fascinating insight into the First Lady’s anxiety during the Kennedy White House years and those following JFK’s assassination. This previously unquoted material includes eleven letters from Jackie to Kay Halle, a family friend of both the Churchills and Kennedys, describing her time in the White House and the painful years after her husband’s murder. WHEN LIONS ROAR also includes little-known letters from Jackie Kennedy to Pamela Churchill Harriman, the former wife of Winston’s son Randolph and once a very close friend of JFK’s sister Kathleen “Kick” Kennedy before her untimely death in a tragic air crash.

How Randolph Churchill, once expected to become prime minister like his father, may have suffered from an undiagnosed bi-polar mental condition that haunted his tragic life.
Winston’s only son suffered from an “illogical tantrum” that he described as “a physical sensation that arose from the earth” and left him feeling out of control. “If I can stop it before it reaches my knees I will be all right,” Randolph explained to Kay Halle, his loyal friend and former lover, “but once it gets above them, a black fog envelops me and I just don’t care what I say.” As Maier writes, Randolph Churchill displayed signs of bipolar disorder (then called manic depression) as defined in today’s medical literature: very elevated emotional highs with racing thoughts and talkative outbursts, followed by remorseful “black fogs” and feelings of worthlessness; irritable moods and little temper control; impulsive decisions and spending sprees; binge drinking and over-eating; compulsive sex with many different partners; and a false overestimation of self-importance. In an interview with Maier, Lady Juliet Townsend, Randolph’s goddaughter, said many of these symptoms were evident in his demeanor though never diagnosed professionally. “He certainly was a person who was very up and down,” she recalled in 2012, “and got more down than up as time went on.” His contemporaries, including author Evelyn Waugh, dismissed these problems as part of Randolph’s eccentricity or buffoonery, without regard for a deeper cause. Neither Winston nor his wife Clementine was much for psychological analysis either, and none of their correspondence about Randolph’s behavior, which included alcoholism, suggests it. Maier writes that perhaps the nagging sense of a family link--that his son’s erratic nature too closely resembled that of Winston’s late father, Lord Randolph Churchill--was too uncomfortable for Winston to consider. Throughout his own life, Winston had suffered from dark moods and depression – what he called “the black dog” – and his son’s behavior problems eventually became too much for him to bear, causing confrontations between the two.  Randolph died at age 57 in 1968.

Maier re-writes history to show the Kennedys and Churchills began as friendly acquaintances, not enemies.
Conventional wisdom concerning the Churchills and Kennedys is that the two families harbored an intense dislike for each other, stemming from irreconcilable differences over the U.S.’ involvement in World War II. As WHEN LIONS ROAR details, however, the Churchills and Kennedys began their relationship with several shared interests and mutual friends, including Winston’s American pal Bernard Baruch who was Joe Kennedy’s business associate. And contrary to popular belief, despite lingering years of anger and rancor during and after World War II, the two families became good friends once again by the 1960s. Indeed after JFK’s 1963 assassination, Bobby Kennedy asked Randolph Churchill to write the approved biography of his slain brother with Jackie Kennedy’s blessings.

For further information or to schedule an interview with the author, please contact
Dyana Messina at 212-572-2098 or at dmessina@randomhouse.com
Email Post
Labels: Jackie Kennedy Jacqueline Kennedy JFK Kennedys Masters of Sex news Thomas Maier When Lions Roar: The Churchills and the Kennedys winston churchill