EXCERPT Adapted from "WHEN LIONS ROAR": Long Before Obama’s Cuba Deal, The Vatican Offered Secret Diplomacy To FDR with a Kennedy’s Help

Adapted from "WHEN LIONS ROAR": Long Before Obama’s Cuba Deal, The Vatican Offered Secret Diplomacy To FDR with a Kennedy’s Help.


Thomas Maier is the author of “When Lions Roar: The Churchills and the Kennedys” (Crown). 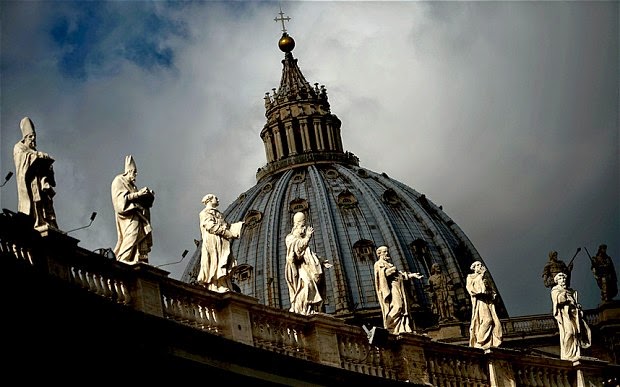 Many were surprised by the Vatican’s role in secret displomatic meetings that led up to the recent ground-breaking American overture to Cuba. But President Obama wasn’t the first White House occupant offered such help from Rome.
Arguably the first president to recognize the Vatican’s influence was Franklin D. Roosevelt, at the urging of his ambassdador in Great Britain, Joseph P. Kennedy -- the father of future president John F. Kennedy.
In 1939, the world’s busiest and most complex spy center wasn’t found in London or Washington, but rather in Vatican City, the 110-acre, postage-stamp-size home to the Roman Catholic Church, buzzing with rumors of the impending World War II. Hugh Wilson, the departing U.S. ambassador in Berlin, called the Vatican “the best information service in Europe.” The Vatican had listening posts in virtually every nation, with its mix of concordats and papal nuncios keeping the Church’s intelligence arm well informed. Hitler and the Nazis tried to place their own spies within the Church’s midst.
For years, the American government seemed ignorant of the Vatican’s preeminence in espionage. But as war approached, Joe Kennedy pushed the Roosevelt administration to catch up.
“Experiences in London had taught me the value of being in touch with Rome with its vast sources of intelligence reaching almost every corner of the world,” Kennedy later recalled in his unpublished memoir. “The information that the Vatican had with reference to conditions in Germany, in Austria and in Italy had peculiar value to us.”
The Vatican connection proved an important political asset for the Kennedys in years to come. Joe used his discreet, largely unknown ties to Rome to buttress his position as one of America’s leading lay Catholics in public life, helped by his personal friendship with top clergy and his generous charitable donations as a wealthy man. His dream of seeing a Kennedy someday elected as the first Catholic president relied in part on the Church’s implicit support and on millions of ethnic Americans who identified with this barrier-breaking goal.
In the late 1930s, however, Kennedy’s main effort with the Vatican focused on gaining secret intelligence for the U.S. government. To underline his unique contributions, the London ambassador once again entrusted his cause with the president’s son, James Roosevelt. In April 1938, Kennedy sent young Roosevelt “a strictly confidential memorandum which I have received personally from Cardinal Pacelli,” then the Vatican’s secretary of state (and future Pope Pius XII), and asked Jimmy to pass it along to the president. A State Department document later said Pacelli’s memo outlined “the relations of the Vatican with various countries.”
How Joe Kennedy obtained the memo isn’t clear from documents (now housed in the JFK Presidential Library), though Jimmy portrayed it to his father as a small coup, a reminder of Joe’s unique contacts.
Cardinal Eugenio Pacelli, a thin-faced, austere man with thick eyeglasses, had been the Church’s chief diplomat since 1930, creating written treaties with several nations that allowed Catholics to practice their religion and run schools, hospitals, and church organizations without state interference. His 1933 concordat with Hitler’s Germany would later raise concerns about Pacelli’s view toward the Nazis. However, Winston Churchill, who had known Pacelli on a friendly basis since they first met in London in 1908, held a more nuanced view of the Vatican diplomat. Both Churchill and Pacelli shared a similar dread about the Bolsheviks in Russia. They feared communism would lead to the spread of godless dictatorships as threatening as the Nazis. In his memo to Kennedy, Pacelli said the Church felt “at times powerless and isolated in its daily struggle against all sorts of political excesses from the Bolsheviks to the new pagans arising from the ‘Aryan’ generations.”
Historically, many criticized Pacelli for a slowness or silence in confronting the Nazis, especially over their persecution of Jews both before and during World War II. But Pacelli’s 1938 memo makes clear his opposition to the Nazis and the embattled position Catholics faced with Hitler, despite the protections agreed upon with the concordat.
“No matter what pretexts are set forth by the German government, the real fact is that since the early time after the Concordat was signed a more or less open attitude against all clauses accepted in the Concordat was adopted by the German government,” Pacelli wrote in the translated version from Italian sent to the White House. “The Holy See has used all possible ways to protect the freedom of the Church and of the Catholics, keeping itself ever ready to do the best in order to avoid any more bitter conflict, and being always prompted by the desire of avoiding to make the situation more and more difficult.”
In his own note to Jimmy, Joe Kennedy pointed to portions of Pacelli’s memo that underlined the Vatican’s role as a beehive of intelligence and the strategic need for America to be more present in Rome. The future pope’s note read: “It will be very fine if you will convey to your Friend at home these personal private views of mine,” and he urged President Roosevelt to appoint a U.S. diplomat to the Vatican. Pacelli underlined that “in this very crucial moment of the European political life that the American Government is without a direct source of information from and a straight and intimate connection with the Vatican circles.”
For nearly a century, the American government had refused to send a diplomat to the Vatican, an opposition largely fueled by the nineteenth-century Know-Nothing movement and lingering anti-Catholic bigotry. Kennedy tried to convince Roosevelt to send an American envoy to the papal state, both as a practical improvement to U.S. intelligence abroad and good politics at home among many Catholic Democrats.
As the world inched toward war, this memo bolstered Kennedy’s argument for a better U.S. presence in Rome.
Email Post
Labels: Catholic Church Churchill Cuba Enrico Galeazzi Joseph P. Kennedy news Pacelli Pope Pius XII President Obama Roosevelt spying Vatican