Remembering Winston: When Churchill Met The Kennedys: Excerpt from WHEN LIONS ROAR

Winston Churchill passed away 50 years ago, January 24 1965. This excerpt from "WHEN LIONS ROAR: The Churchills and the Kennedys" recalls the first time the future British Prime Minister met with the soon-to-be famous American family. 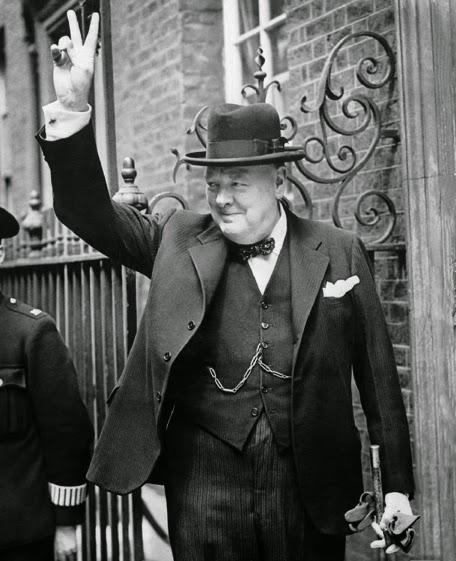 On the distant hill before them, greatness awaited. Rose Kennedy could feel it in her bones. Her family’s long journey from America to England culminated at Chartwell Manor, the magisterial home of Winston Churchill, a celebrated British statesman-writer better known to Americans than the king, George V.
From their approaching automobile, the Kennedys could see the old Tudor-style building made of red brick perched high above a meadow, water gardens, and surrounding beech trees. As their car drove up the winding gravel road of the wooded eighty-acre estate, a large, imposing gate swung open to let them in.
As if by some gravitational pull or providential design, these two dynastic families—one American, one British—seemed fated to meet, their fortunes soon intertwined forever.
“At last the coveted invitation arrived to visit Mr. and Mrs. Winston Churchill at their home in the country outside of London,” Rose recalled years later. “We were very excited and delighted at the prospect of meeting him en famille as we motored through the lovely English countryside on a typical English rainy day and arrived at the simple comfortable country house for lunch.”
Some historians contend that the first meeting between the Kennedys and Churchills took place in October 1935, though there is much to suggest this initial encounter occurred two years earlier, at Chartwell. As the oft-repeated story goes, Winston Churchill and Joseph P. Kennedy, the family patriarchs, began a visceral dislike for each other almost immediately, one that would devolve into rancor and several fateful differences leading up to World War II. “Winston despised him,” the American diplomat W. Averell Harriman, an intimate of both families, emphatically told historian Arthur M. Schlesinger Jr. four decades later.
But the reality between these two families was far more complicated, as life tends to be, both personally and in public.
When the Kennedys arrived at Chartwell, Rose remembered a most convivial greeting. Churchill’s wife, Clementine, came to the door dressed in tweeds and a rose-colored sweater that enhanced her “pink fresh coloring and soft grey hair.” Rose took note of Clementine’s refined features. “She is one of the most attractive women I have ever met,” observed Rose, herself a stylish, thin woman who appeared no worse the wear for having borne nine children. She found Clementine “keen on politics and well-informed” just like her. Winston delighted in shaking their hands. “Mr. Churchill with his puckish face was clad also in tweeds and looked more like a country squire than an English statesman,” wrote Rose. “We found him charming, amiable and very frank in his discussion of events.”
Like most women of her era, Rose Fitzgerald Kennedy—the daughter of Boston’s former mayor and wife of a multimillionaire who aspired to the White House—found herself relegated to the position of an observer, rather than a participant, in the exchanges between powerful men. On both sides of the Atlantic, the world in the early twentieth century was still ruled by fathers and their sons. Yet in Rose’s political judgment, savvier than most, Churchill was “one of the great men of the generation.” Meeting him at Chartwell merely confirmed her belief. 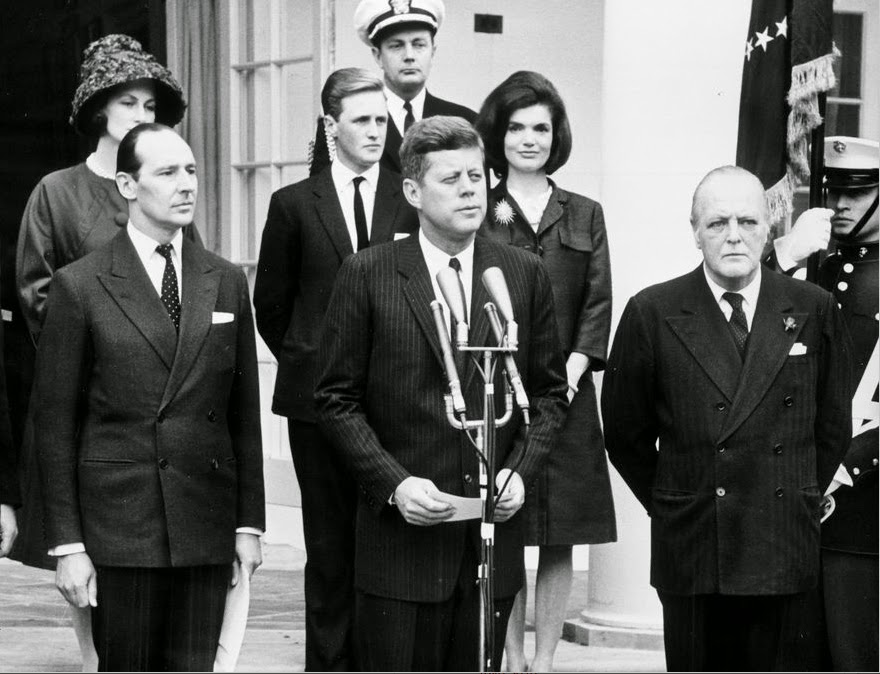 Undoubtedly, John Fitzgerald Kennedy, her second-oldest son, agreed about Churchill. While recuperating in America from his constant illnesses, young Jack had read many of Winston’s accounts of manly heroics, faraway adventures, and bloody battles. Churchill’s words captivated young Kennedy, illuminating a world that the often sickly and painfully thin schoolboy could only dream of sharing one day. Within Churchill’s sprawling histories, Jack found a piece of himself. He gobbled up the masterful biography Marlborough, about John Churchill, the First Duke of Marlborough, an ancient ancestor of Winston’s who helped save the British monarchy. (As president years later, Kennedy called Marlborough one of his favorite books, along with John Buchan’s Pilgrim’s Way.) In his writings, Churchill offered fascinating lessons in high politics and wartime strategies, combined with moments of personal danger and exemplary acts of courage. Each journey brought a new story of derring-do and near-death escapades told with his trademark wit. “Although always prepared for martyrdom, I preferred that it should be postponed,” Churchill explained.
After a rocky start as a student, Winston emerged as a self-made man. He extolled the virtues of the British Empire as one who had seen the world in all its blood and glory and lived to tell about it. As a war correspondent in the Sudan, he witnessed the Royal Army’s last cavalry charge against the frenzied swordsmen called “Whirling Dervishes”—swarming down a hillside with bloodthirsty zeal, “the sun glinting on many thousand hostile spearpoints.” In India, Winston avoided death and eluded the onslaught of Pathan tribesmen along the Afghan border, who chased him with their guns ablazing. And in South Africa, Churchill was taken prisoner while covering the Boer War, only to escape and travel secretly on a freight train to freedom while the Boers advertised a bounty for his head. How could any red-blooded American boy like Jack Kennedy not be enthralled by the never-say-die spirit of a British gentleman at war like Winston Churchill?
“In one respect a cavalry charge is very much like ordinary life,” Churchill advised. “So long as you are all right, firmly in your saddle, your horse in hand, and well armed, lots of enemies will give you wide berth. But as soon as you have lost a stirrup, have a rein cut, have dropped your weapon, are wounded, then is the moment when from all quarters enemies rush upon you.” With a vicarious thrill, Kennedy admired Churchill’s eloquence and pluck, the joie de vivre of a man who, after nearly being killed by gunfire, could declare with glee, “Nothing in life is so exhilarating as to be shot at without result.”
Most Americans, like the Kennedys, shared a similar heroic image of Churchill. The press portrayed him as a Renaissance man born of the Victorian age yet very much a product of his modern era. Chartwell reflected Churchill’s vision of himself as a soldier, writer, essayist, journalist, orator, and statesman. Evidence abounded there of a man who enjoyed being a polo player, huntsman, painter, and even bricklayer. His home was incorporated into the legacy Winston planned for his only son, Randolph, a golden-haired lad who was a more naturally gifted orator than his father. “Chartwell is to be our home,” Winston wrote to his wife, Clementine, when they bought the place a decade earlier. “We must endeavour to live there for many years & hand it on to Randolph afterwards.”
Life to Winston was part of a family continuum, connected to the history of Great Britain and to all English-speaking peoples. In his own distinctive way, he sometimes acted more like an artist or a historian than a calculating politician. As the New York Times observed in 1931, those familiar with Churchill were “astonished by his versatility, and rather bewildered—as if there were something odd about a man who, in addition to having held almost every post in the Cabinet except that of prime minister, can paint pictures that people are proud to hang on their walls, write books that are called masterpieces, build brick houses with his own hands, and make speeches, classic in structure, in quality bold, vivacious, epigrammatic.”

The memorable first encounter between the Churchills and the Kennedys came at a nadir in both their lives. By the time the Kennedys arrived at his door, Winston was well into what biographers later called his “wilderness years.” During this time, Churchill lost a fortune in the stock market and the heavy expenses of running Chartwell were almost overwhelming him. He suffered a near-fatal accident when a car struck him while he was visiting New York. His bouts with depression—what he called “the black dog”—sometimes got the best of his ebullient spirits. Perhaps most disheartening, the long ascendant arc of Churchill’s life in the public arena seemed over. He had switched parties repeatedly, from Conservative to Liberal and back again. “Anyone can rat,” he quipped, “but it takes a certain amount of ingenuity to re-rat.”
Now at an age when most men thought of retirement, Churchill found himself out of power. He’d alienated enough parliamentary colleagues to wonder if his dream of becoming prime minister would ever come true. He considered leaving politics altogether until longtime friend American financier Bernard Baruch told him he “would be hopeless as a businessman”: “Here I am, discarded, cast away, marooned, rejected and disliked,” Churchill lamented, as if a lion in winter, a relic from the past.
The future of young Jack Kennedy also seemed much in doubt as he joined his parents on their trip to England in 1935. Jack intended to enroll at the London School of Economics, while “Kick,” as nearly everyone called his sister Kathleen, who accompanied them, would study at a convent school in France. Once again, the family’s second-oldest son would follow the path set by his older brother, Joseph Jr., a gregarious young man who was his father’s favorite. In contrast, Jack had earned the scorn of his parents for his pranks and listless attitude. His tomfoolery nearly got him tossed from Choate, a top New England preparatory school, where Joe Jr. had been a star football player graduating at the top of his class. In a letter comparing his two older sons, Joe Kennedy Sr. admitted to Choate’s headmaster that “the happy-go-lucky manner with a degree of indifference that he [Jack] shows towards the things that he has no interest in does not portend well for his future development.”
Exasperated with his son, Joe Kennedy first tried reasoning with him. “Now Jack, I don’t want to give the impression that I am a nagger, for goodness knows I think that is the worse [sic] thing any parent can be, and I also feel that you know if I didn’t really feel you had the goods I would be most charitable in my attitude towards your failings,” wrote his father in December 1934. “After long experience in sizing up people I definitely know you have the goods and you can go a long way. Now aren’t you foolish not to get all there is out of what God has given you and what you can do with it yourself.”
A few months later, after a French teacher complained about Jack’s lack of success in class, Joe let his second son know he’d had quite enough. “Don’t let me lose confidence in you again, because it will be pretty nearly an impossible task to restore it—I am sure it will be a loss to you and distinct loss to me,” Joe Sr. warned. “The mere trying to do a good job is not enough—real honest-to-goodness effort is what I expect.”
Going to London offered a second chance for Jack Kennedy, a way to redeem and redefine himself in the eyes of his father.