Bravo Announces "ALL THAT GLITTERS" Being Developed by Sony, Based On Award-Winning "Newhouse" Biography; Exec Produced by "Walking Dead" Gale Anne Hurd and "Masters of Sex" Judith Verno 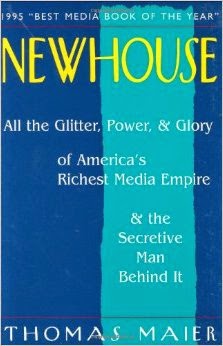 The award-winning "Newhouse" book is now becoming "ALL THAT GLITTERS" on Bravo, produced by Sony and Universal. It's being exec produced by Gale Anne Hurd of "The Walking Dead" and Judith Verno of Sony's "Masters of Sex." I'm the author and a producer of this new project and very grateful to my friends at Sony.﻿

Here's the story from Variety:

Bravo is pumping up its slate of scripted originals, and a key ingredient in the expansion will be a 1980s period drama from “Walking Dead” producer Gale Anne Hurd, Variety reports.


Hurd’s Valhalla Entertainment and Judith Verno’s Peace Out Productions are behind “All That Glitters,” which is being developed as a miniseries, the story reports.
“Based on Thomas Maier’s book ‘Newhouse: All The Glitter, Power and Glory of America’s Richest Media Empire and the Secretive Man Behind It,’ the project is set at the heyday of the magazine business in the 1980s when editors including Vogue’s Anna Wintour and Vanity Fair’s Tina Brown were ruthless in their competition to dominate the publishing world,” Variety reports.
"NEWHOUSE: All the Glitter, Power and Glory of America's Richest Media Empire and the Secretive Man Behind It," (St. Martin's Press, 1994) won the Frank Luther Mott Award by the National Honor Society in Journalism and Mass Communication as best media book of the year. Excerpts appeared in the Columbia Journalism Review, Worth, and The London Telegraph magazine. An updated trade paperback of "Newhouse," published by Johnson Books, was picked by Entertainment Weekly as one of the top ten "must reads" for the 1997 summer season.
Email Post
Labels: All That Glitters Anna Wintour Bravo Conde Nast Gale Anne Hurd Judith Verno Newhouse Sony Thomas Maier Tina Brown Vanity Fair Vogue