Virginia Johnson, Kay Halle and Other Independent-Minded Women in My Biographies -- How They Were Often Overlooked by History 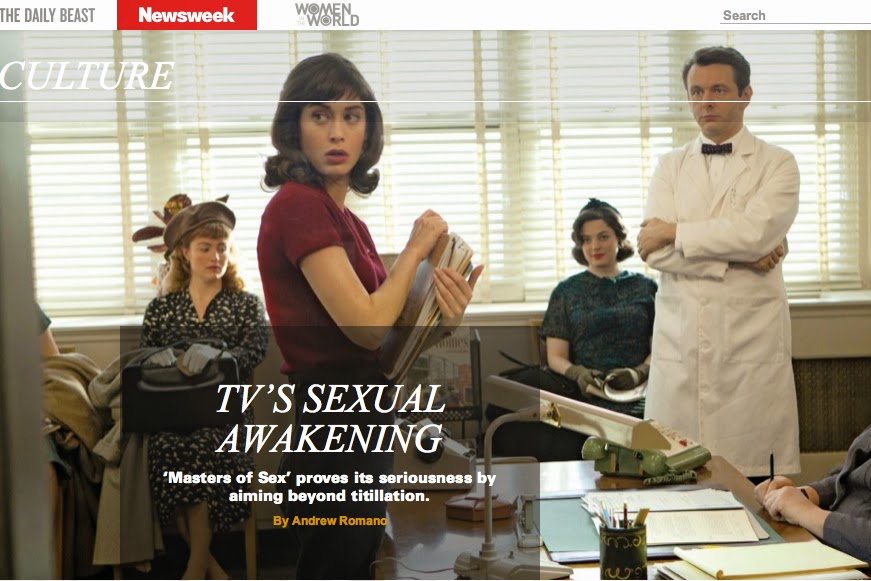 Women often play significant roles in history, yet rarely do they get proper credit. Too often biographers (especially males) have portrayed smart and savvy women as “weaker sex” afterthoughts, rather than honestly and openly exploring the impact of their relationships with powerful men.

This unfortunate trend stretches across much of American history, a narrative largely determined by presidents, captains of industry, and other powerful men in a male-dominated society who, it would seem, preferred to act as if independent-minded women never existed. This seems particularly true if the woman wasn’t married to the powerful man being lionized.

My first experience with this “trend” happened as I interviewed Virginia Johnson for my 2009 biography, “Masters of Sex”, now the basis for the Showtime television series. Few American women in the 20th Century were more independent-minded and fascinating than Johnson, and yet she was relegated unfairly to the shadows of history along with her research partner, Dr. William Masters.

Sex was their topic in the 1950s, a time when women were still very much in an inferior role in American society. These two researchers were not married for the first two decades they worked together. So Johnson’s impact on the work of Masters and their lives together usually remained unexplored by those who wrote about them. They eventually married in 1971 and divorced 20 years later.

When I first talked with her in 2005, Johnson was 81, living alone and feeling forgotten. The nearby St. Louis university where Masters and Johnson did their ground-breaking medical research ignored her. And most young people didn’t even know their name.

Yet during America’s so-called “sexual revolution” in the 1960s, Johnson was the driving force behind many pioneering observations and therapies. For all of Masters’s academic credentials as a top Ob-Gyn, Virginia, without a college degree, possessed an innate genius about the human psyche that proved invaluable. It leveled the playing field between them, giving Johnson the chance to exert herself as an equal, rather than as an “associate” or other easily-dismissed accessory. “At least 70 percent of the therapy was her idea,” Masters later acknowledged. “Her incredible brain” mixed together all sort of influences and remedies. 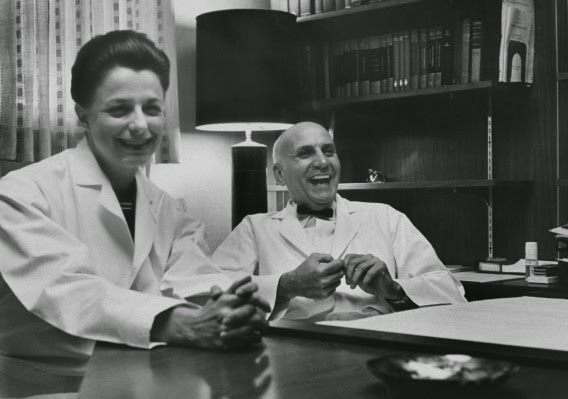 Masters’ male colleagues in medicine scoffed at his claim that their revolutionary therapy model derived mainly from Johnson’s imagination: How could a woman without a doctorate come up with such a thing! The controversial topic of sex made it even easier for critics to treat Johnson like a courtesan. But Masters never backed down from supporting Johnson. Unlike other men from the past and the generations that would follow, Masters shared credit with her on their famous works.

For a woman of such independence, who had proven in the lab the sexual equality, if not the superiority of women, Johnson found it inexplicable why her life had been defined so often by men and their definition of sex. It was a common lament of many women in the 20th Century and voiced even today by women better educated, more affluent and generally with more options in life. “I was raised to be one of the greatest support systems to great men,” she explained during my interviews with her for my 2009 book. “I can remember saying out loud—and I’m appalled as I remember it—being very pleased that I could be anything any man wanted me to be. And I was proud of that, for some ungodly reason.”

In my new book about the Churchills and the Kennedys, primarily about famous fathers and sons, I was hoping to steer clear of the subject of sex. But I soon found that a number of female family members and intimate friends of both dynasties were remarkably influential in the lives of the male headliners—far more so than our traditional understanding of their role would have us believe.

To be sure, in most histories of these two families, Winston’s wife, Clementine, and JFK’s wife, First Lady Jacqueline Kennedy, and mother, Rose Kennedy, played hugely important roles. So did their brothers, best friends and other male business partners. But I was surprised how much other independent-minded women were prominent behind-the-scenes figures in this dynastic saga.
One of the most remarkable women I learned of was Kay Halle—an American journalist and wealthy heiress intimate with both families.In the 1930s, Kay nearly married Winston’s son Randolph and remained a Churchill family friend for decades. While she had a secret affair with JFK’s father, multi-millionaire Joseph Kennedy, she also managed to remain a friend and close advisor of that clan for years to come From her unique vantage, It was Halle who, almost single-handedly, convinced President John F. Kennedy to award honorary U.S. citizenship to former British Prime Minister Winston Churchill for his brave leadership during World War II. The Churchills and Kennedys had sharp bitter differences leading up to the war, but Halle prevailed on JFK to mend their differences with this first-of-its kind honor, bestowed at a splendid Rose Garden ceremony in 1963.

This instance of Halle’s behind-the-scenes involvement with both families was just one of many, almost completely unknown to history until her survivors decided to donate her letters and papers to the JFK Library. These documents, released in 2011, make this fiercely independent-minded woman come alive. “Randolph inspired me to look above the hedgerows of my young life and explore the world,” Halle wrote after meeting the Churchills.

During the WWII years, Clare Boothe Luce, a talented writer, playwright and future Congresswoman, became a close private friend of both families. “I think of you constantly and pray with Churchill that it will come out all right in the end,” Clare wrote to Joe Kennedy, then the U.S. ambassador in London, shortly after war in England began and she returned to the United States. Both she and Kennedy were married to others. But like this famous man in her life, Clare knew how to compartmentalize sex and politics. With beguiling style, she could also combine them to her own advantage.

In her writings and public statements in the late 1930s, Clare became one of Churchill’s biggest supporters in the fight against Hitler, at a time when most other Americans still wanted to avoid war. “I have thought of you and your gallant father very often since the elections,” she wrote to Randolph in 1945, after British voters removed Winston as prime minister soon after winning the war. “In or out of office, he [Winston] stands incomparably the world’s greatest man—maybe its only great one now.”

After the war, another remarkable woman, Pamela Churchill, the beautiful estranged wife of Randolph, became best friends with JFK’s sister, Kathleen “Kick” Kennedy. (She’d eventually become a U.S. citizen and was appointed by President Clinton as his ambassador to France.) But during WWII, Pamela often acted as an informal confidant to Winston Churchill and a keen diplomatic observer -- all while having an initimate relationship with President Roosevelt’s top envoy, Averell Harriman. Her importance is often lost historically. Pamela helped White House aide Harry Hopkins forge a special alliance with Churchill, allowing him to serve as a vital intermediary between President Franklin D. Roosevelt and the Prime Minister -- or as Hopkins put it, “a catalytic agent between two PRIMA DONNAS.” “Harry had an extraordinary faculty of explaining president to prime minister and I think prime minister to president, so that when they met, Churchill thought he knew Roosevelt,” Pamela observed.

Somehow, the influence of these very talented and influential women really wasn’t explored by history until many years after the fact, despite their significant contributions. The intimacy of these women with the powerful men in their life were usually dismissed as mere gossip or not germane to the larger story. Their diminished lives fell victim not only to the sexism of their times but also the patronizing, paternalistic tone of predominantly male historians.

Even women of great accomplishment were lost in this mix. In my new book dealing with John F. Kennedy, I carefully examined the little-known experience of Margaret Coit, winner of the 1951 Pulitzer Prize for her biography of John C. Calhoun. Coit came to Washington in 1953 to research a new book and wound up dating the thirty-five-year-old Massachusetts senator. The two saw each other a few times before Kennedy met and married Jacqueline Bouvier.

In an oral history virtually ignored by previous JFK chroniclers, Coit gave a vivid and insightful account of this driven, very complicated young politician and the aggressive way he apparently treated women. In their private conversations, she recalled how Jack Kennedy talked about his ambitions and about his envy of Coit’s Pulitzer. When they drove past the White House in a car, she recalled, Jack appeared quite serious as he looked through the gates. “I am going to go there,” he stated with determination.

But at other times, Coit said, Kennedy’s personality seemed to change, and his hands were all over her. “He had seen me as a mind; and now he saw me just as something female,” Coit recalled. “He couldn’t fit the two together, and it was as if he were two parts. He was like a fourteen year old high school football player on the make; and he was like an elder statesman of sixty in his intellectual process—the two together and it was the cold machine-like quality that scared me so.”

Although Coit was a Pulitzer-winning historian, her fascinating account rarely appears in the histories of this future president.

Ironically, this historical double-standard on sex could apply to the ambitions of Kennedy women as well. Eunice Kennedy, perhaps the smartest of the Kennedy children, graduated from Stanford University, but the goals and ambitions for Eunice were never the same as they were for her brothers. Patriarch Joe Kennedy, keenly aware of bigotry against his own kind as an Irish-Catholic, didn’t seem bothered by inequality facing his daughters. “If Eunice had balls, she would have been president,” her father bragged, without a sense of irony.

Yet too often the absence of sex and gender concerns skewed our understanding, as if these women couldn’t possibly have contributed significantly to such traditionally male topics as science, medicine, power and politics.

Today, there are many things we can learn from these independent-minded women of the past, not the least of which is the sheer determination of will and the desire to succeed. But history must first be willing to examine their full, often intimate lives with the celebrated men who often received all the glory.