How would Churchill Handle the Middle East Today? My Visit to Detroit and the Churchill Society of Michigan

I visited Detroit earlier this month to speak about WHEN LIONS ROAR: The Churchills and the Kennedys" to the Winston Churchill Society of Michigan at a lovely dinner held at the Gross Point Country Club. My wife Joyce and I were the guest of the society's president Richard Marsh and his lovely wife Mary Jo. (see us together with the Winston cut-out!) 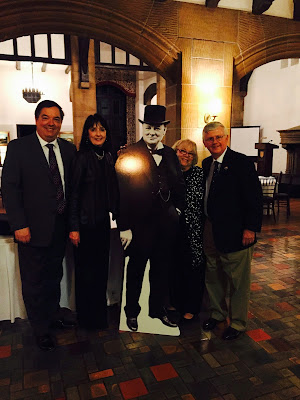 Some people asked how Churchill might have handled the Middle East today, at least in my estimation. Well, certainly Winston was an imperialist and, in his time, he was the leading defender of the British Empire and maintaining its interests around the world. But I'm not sure he would be a"neo-con" as we understand it here in the United States.


Here's a fascinating new BBC documentary on Churchill. On the 50th anniversary of Winston Churchill's death, Jeremy Paxman tells the story of the send-off which Britain gave to the man who led the country to victory in the Second World War. More than a million people came to line the streets of London on the freezing day in late January to pay their respects as his coffin was taken from the lying-in-state at Westminster to St Paul's Cathedral. Millions more watched the state funeral on television. Churchill was the only commoner in the twentieth century to receive the honour of such a magnificent ceremony.