MASTERS OF SEX Season 3 Thoughts: My Two Cents As Author and Why The Show Should Win An Emmy for Best Drama


With the Season 3 premiere for "MASTERS OF SEX" fast approaching, I've been asked by a number of journalists for my thoughts about the adaptation of my book by showrunner Michelle Ashford and the rest of the Showtime/Sony gang. Here's my two cents:

In short, they've done a great job in using my non-fiction, all-on-the-record biography and turning it into a TV drama, which, as we know, is fictional by definition. Frankly, given the demands of TV, what's really surprising to me is how much they've actually used from the book, even little strands of stuff. Michelle Ashford has done a wonderful job in synthesizing and capturing the book's flavor and meaning. All I ever asked as the author was that Michelle make the very best TV drama possible from my source material. And by golly, I think she's done it.
For instance, the best episode of Season 2 called "Fight" uses two major things from the book as tent poles for that episode -- Virginia's lost love with an Army Captain during World War II and how Bill was beaten by his father as a young man. That portion of "Fight", written by exec producer Amy Lippmann, came directly from my book. In fact, when I watched that episode, I remembered the real Virginia's emotional tone in her voice during our interviews together when she recalled how she loved that guy and was suddenly left flat. I also suggested  in a memo to Michelle that Season 2 explore the troubled psyche of Masters and she did that -- something I know that Michael Sheen wanted developed as well. The book is a tour de force for the Virginia character but I felt it was very important to balance things in the TV drama by examining the more introverted but highly ambitious Masters character. Sheen's interpretation has been his own creation but I think it is, well, master-ful. 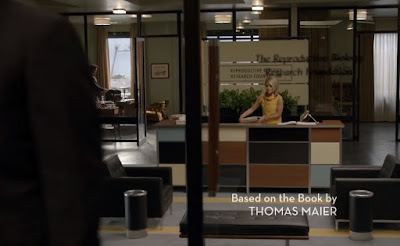 Of course, some other things from last season were completely made up, like the move to Buell Green hospital and its exploration of race in St. Louis -- but that proved remarkably topical when it appeared. That was a brilliant, prescient move by Michelle in light of what happened last summer in Ferguson. I like when they come up with new stuff that wasn't in my book but has some relation to St. Louis history or real events of the time. Many other fictional twists and turns by Michelle and her team worked well dramatically. But I think the most surprising twists are the real-life ones -- mainly because of that old saw that truth is stranger than fiction. You'll see that a lot in the upcoming Season 3, as the drama draws again directly from my biography.

The biggest twist in Season 3 will be the character played by Josh Charles. It's based on a real guy named Hank Walter, a millionaire scent and flavors manufacturer in New York. He becomes an important patron for Masters and Johnson, and he winds up courting Virginia and pushing her to marry him and leave town and the Masters partnership. This should be great fun dramatically and it's comes right out of the book. The other big thing in Season 3 is the publication of 'Human Sexual Response' -- the first big M&J book -- and that too comes out of the biography, right down to little details. My personal Season 3 favorite is that we'll be introduced to Virginia's parents, and learn a lot more about her life before meeting Bill.

I just watched Ep 1 of S3 and they used a lot of stuff from the book -- Virginia's feelings about not getting a college degree and the careful press presentation in Boston in advance of their first book (are reporters really that well behaved?). But I know Michelle wants to double down on the working woman and family issues surrounding Virginia, especially since VJ and Masters slowly developed a parity in their partnership. As I understand it, the disclaimer about the kids was purely for legal reasons.

Overall, IMHO, 'Masters' is the best drama on TV, especially one that isn't death obsessed or violence prone. It's become a memorable and poignant parable about human intimacy and our search for love.  I strongly believe the two episodes from Season 2 -- the first one featuring Beau Bridges and "Fight" -- really deserve to win the Emmy for best drama. And down the road, I know that the M&J will only get better, sort of a "Who's Afraid of Virginia Woolf" as Bill and Gini get married and get older.
Email Post
Labels: best drama biography Emmy entertainment newsStill Lizzy Caplan Masters of Sex Michael Sheen michelle ashford news Season 3 showtime Thomas Maier