This Trump-Vatican connection isn't the first. 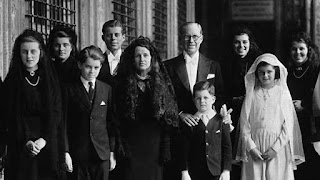 This Vatican connection to an American presidency isn't the first. My books on the Kennedys examined the impact of religion and cultural background on JFK's presidency-- a different approach from the usual examination of "presidential character" through the dominant Freudian influences of the mid-20th Century. My two books particularly looked the remarkable exchanges between JFK's father Joe Kennedy and Count Enrico Galeazzi, the Vatican's top administrator for Pope Pius XII, and how it affected events with FDR in 1936, the CIA's Allen Dulles in 1958 and of course the 1960 presidential race against Richard Nixon. David Nasaw and I discussed this at the JFK Library back in 2014.
There are a lot of little historical gems to find with this approach. For instance, read in WHEN LIONS ROAR how Joe Kennedy was pushing FDR in 1940 to tap into the Vatican intelligence network of concordats to find out more about Nazi Germany's spreading influence. Or how Joe wrote to Galeazzi in 1958 about Dulles’ private visit to the Kennedy home in Florida, hoping that JFK would keep him in place, and how Joe offered be a conduit between the Vatican and the CIA. Who knew, eh?
I thought the NYT front-pager last week about Bannon and this right-wing Catholic faction was fascinating and an important realization for political reporters of how the underpinnings of religion and cultural background can inform "presidential character".
Email Post
Labels: Count Enrico Galeazzi Kennedys Trump Vatican