British Spying in New York -- How Churchill and British MI6 Kept an Eye on Joe Kennedy in pre WII America. 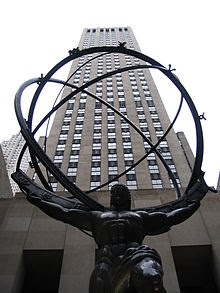 I'm not given any credence to President Trump's claim of British spying in Manhattan. But if true, it wouldn't be the first time. For  my 2014 book WHEN LIONS ROAR: The Churchills and the Kennedys," I found British National Archives files that reveal  surveillance reports on former U.S. Amb. Joseph P. Kennedy's activities in America after he returned home from London. The British spy agency MI6, with Churchill's approval, kept an office for covert spying inside Manhattan's Rockefeller Center. British  agents collected reports about Kennedy who was an outspoken opponent of U.S. entry into World War II. Churchill and the British spy agency were concerned with Kennedy's impact on American public opinion. One of those who kept an eye on Kennedy was British actor Douglas Fairbanks in Hollywood.

Here's an excerpt from "WHEN LIONS ROAR" that mentions it...

“The Masters of Our Fate”

Right after Pearl Harbor, Joe Kennedy cabled Roosevelt, hoping to become an American version of Lord Beaverbrook by boosting arms production for the war. Although he’d opposed entry into the European conflict, Kennedy always remained a strong proponent of military buildup for defense. In recent months, one New York newspaper had even suggested he would be selected to “head up the National Defense Advisory Commission, just as Barney Baruch did in the last war.” In a surge of patriotism after the Japanese attack, Joe volunteered his services to the president, ignoring their differences. “In this great crisis, all Americans are with you,” he wrote to Roosevelt. “Name the battle post. I’m yours to command.”
While in America with Churchill, Beaverbrook contacted Kennedy, more for social reasons rather than political. No matter how much the British wanted to appear cooperative, little chance existed they would encourage Kennedy’s return to the American government. Churchill knew from his intelligence network about Kennedy’s scathing criticisms inside the United States. In recent years, British officials had attempted discreetly to influence American politics, hoping isolationist objections to the war could be overcome. British agents gained access to secret U.S. diplomatic documents, and only after Pearl Harbor did Churchill warn FDR that “our enemies” could probably do the same. “From the moment we became allies, I gave instructions that this work should cease,” he informed Roosevelt in February 1942, after returning home. That same month, Churchill relayed to the Foreign Office a private letter sent by J. J. Astor quoting Kennedy saying, “I hate all those goddamed Englishmen from Churchill on down.”
Since leaving London, Kennedy had been carefully monitored by British intelligence, with updates on his activities collected by its New York office at Rockefeller Center. “More evidence of regrettable activities on the part of Mr. Kennedy, which should be added to our dossier on the subject,” said one January 1941 memo summarizing the former ambassador’s recent trip to Hollywood. While in California, Kennedy stayed with his son Jack for two nights, as a guest of William Randolph, at the same Santa Monica house where Churchill and his son visited in 1929. Joe addressed a group of Hollywood producers, many of them Jewish, whom he knew from his showbiz days. According a confidential memo sent by the British consul in Los Angeles, Kennedy upset fourteen film producers and executives by claiming “there was very strong anti-Jewish activity in England and that they had better not make any more pro-British pictures or even anti-Nazis pictures.” Of all things, a Three Stooges comedy short, You Nazty Spy!, in which comedian Moe Howard plays Hitler, reportedly provoked Kennedy’s speech.
Though Kennedy “seems to have given little evidence” for his Hollywood warning, he “caused what was tantamount to a panic amongst his almost entirely Jewish audience,” said British consul Eric Cleugh in his memo sent to British intelligence agents in New York and the British embassy in Washington. The memo outlined possible malevolent reasons for Kennedy’s outburst, including “current gossip that Mr. Kennedy wishes to re-enter the motion picture industry and his campaign of terrorism may be prompted by a hope that it will cause some of the Jews to get out of the business, so leaving a gap for Mr. Kennedy.” The British dossier on Kennedy says he tried unsuccessfully to stop a handful of films from being made, including London Can Take It!, a documentary produced by Bracken’s Ministry of Information, and the Hollywood dramas I Married A Nazi (released as The Man I Married) and The Mortal Storm.
In a war of propaganda, Britain could not afford for a former U.S ambassador to endanger its survival. Just as they investigated him in London during the Tyler Kent episode, British intelligence expanded Kennedy’s dossier with other 1941 memos describing him as “embittered and in a vicious frame of mind” and that “he has no sense of the importance of what he says . . . he has no loyalties except to his own pocket.” Cryptically, Cleugh advised that if Kennedy’s impact lingered in Hollywood, “it would probably be advisable for some countermeasures to be taken by an unofficial visitor here.” The document doesn’t say who that “unofficial visitor” might be, or what this British agent might do regarding Kennedy’s actions inside his own country.
At the same time, actor Douglas Fairbanks Jr. privately sent what he called a “tattle tale” note to President Roosevelt. Alarmed by Kennedy’s Hollywood remarks, he warned that the former ambassador claimed “the Lindbergh appeasement groups are not so far off the mark when they suggest that the country can reconcile itself to whomever [sic] wins the war and adjust our trade and lives accordingly. He did maintain, however, that we should continue aiding Britain, but not at the expense of getting ourselves into trouble.” In a reply to the actor, Roosevelt conceded that “what you say fits in with the general picture” about Kennedy.