The 9/11 That Wasn't -- How the FBI Foiled Fidel Castro's attempt to Blow Up New York. 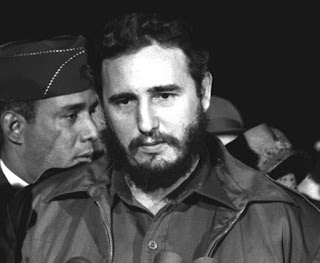 The 9/11 That Wasn't -- How the FBI Foiled Fidel Castro's attempt to Blow Up New York.
(excerpted from MAFIA SPIES by Thomas Maier)


As a marked man, Fidel Castro wanted revenge desperately. His intended bloody retribution against the United States – payback for all the CIA assassination attempts against him in Cuba – was launched in late 1962, with a plan to blow up New York City for the Christmas holiday season.
At the height of October’s Cuban missile crisis, Castro sent Roberto Santiesteban Casanova, a well-trained terrorism expert, to its United Nations mission. The 27-year-old spy posed as a diplomatic  “attaché” with a phony official passport.
Trained at Castro’s G-2 spy school, run by the Russians near Havana, Santiesteban soon became the “ringleader” of an elaborate sabotage plot in New York and the focus of an intense manhunt.
Through its surveillance, the FBI learned of Santiesteban’s plan -- with more than a dozen other pro-Castro spies -- to bomb Macy’s, Bloomingdale’s and another big department store then in the city, Gimbel’s. Relying on a large cache of weapons and explosives, including TNT and grenades, the Cuban saboteurs wanted to blow up the Statute of Liberty, Grand Central Station, the 42ndStreet bus terminal, as well as military bases and oil refineries in nearby New Jersey.
Santiesteban was chosen to mastermind Castro’s bomb conspiracy, intended for Black Friday, the busy shopping day after Thanksgiving. Like another future terrorist named Osama bin Laden, Santiesteban’s plan of attack had an eerie similarity to the 9/11 terrorism that brought so much death and destruction to New York City decades later. But in this case, the FBI managed to prevent disaster, not a moment too soon.
On the Upper West Side, Santiesteban was spotted walking along like any Manhattan commuter, wearing a dark raincoat and brightly striped tie. When federal agents -- tipped off to the Cuban spy’s whereabouts -- confronted him on Riverside Drive, he started running. Armed with a loaded pistol, Santiesteban stuffed papers into his mouth, with secret formulas for explosives, including nitroglycerine, written on them.
After being chased and captured by six agents, U.S. officials charged Santiesteban with “conspiracy to commit sabotage in this country.”  Other Cuban spies in New York were also rounded up.
But a few months later, in April 1963, Santiesteban boarded a plane in New York -- the city he meant to bomb and terrorize with countless deaths – and headed back to Cuba.
Santiesteban’s release from federal prison, along with other Cuban spies caught in the United States, was the finale in an exchange with the Castro government overseen by American lawyer James B. Donovan.
Trading one spy for another was Donovan’s specialty. The Wall Street lawyer became famous negotiating the 1962 release of American U-2 pilot Francis Gary Powers for a Soviet spy caught in America (a 2015 movie of that exchange, Bridge of Spies,starred actor Tom Hanks as Donovan).
Later that year, at the Kennedy administration’s secret request, Donovan went to Cuba as a “volunteer” to broker a deal leading to the release of all 1,100 Bay of Pigs prisoners.
Success would require nothing short of a miracle. “I’ve already done the loaves and fishes,” Donovan joked to friends. “Now they want me to walk on water, too.”
During negotiations, Castro mentioned his desire to see U.S. officials release Santiesteban.The Cuban spy was awaiting trial when Donovan helped with his release in April 1963 as part of a swap for American spies caught in Cuba.
In dealing with Castro, Donovan was debriefed by the CIA, which had homicidal plans of its own. The “executive action” squad wanted Donovan to pass along a scuba-diving suit lined with poison, prepared by its secret lab. According to a declassified CIA history released decades later, the covert action squad “devised a plan to have Donovan be the unwitting purveyor of a diving suit and breathing apparatus, respectively contaminated with Madura foot fungus and tuberculosis bacteria, as a gift for Castro.”
Fortunately for Castro, the scheme failed. Instead of giving out the CIA’s scuba gear laden with toxins, Donovan decided, on his own, to present Castro with a clean new diving suit. Once more, this canny guerilla leader enjoyed a seemingly charmed existence.
“Castro is crazy like a fox,” Donovan later told overconfident Americans expecting regime change at any minute. “Whether certain elements want to accept it or not, the island of Cuba belongs to Castro.”
Email Post
Labels: 9/11 ASSASSINATION Booklist CASTRO CENTRAL INTELLIGENCE AGENCY CIA COLD WAR "Men's Journal" "Book Club" GIANCANA JAMES BOND JFK KENNEDY "MAFIA SPIES" MURDER MYSTERY ORGANIZED CRIME SPYING THRILLER