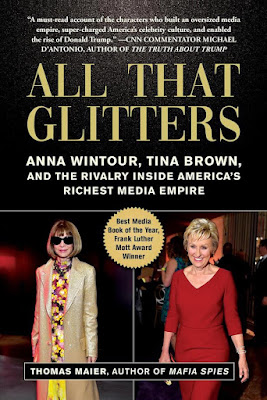 Anna Wintour and Tina Brown were bold and talented British women who fought their way to the top of this male-dominated American industry driven by greed and betrayal. Wintour became an icon of fashion and New York’s high society, while Brown helped define the intersection of literary culture and Hollywood celebrity. They jockeyed for power in the hypercompetitive “off with their heads” atmosphere set up by Newhouse and his longtime creative guru Alex Liberman, two men who for years controlled the glossy Condé Nast magazines that dictated how women should look, dress, and feel. In turning this world upside down, Wintour and Brown challenged the old rules and made Newhouse’s company internationally famous.

Ultimately, one of them won in their fascinating struggle for fame and fortune during the height of New York’s gilded age of print—a time before the internet, before 9/11, when the Reagans ruled the White House and Donald Trump was a mere local developer featured on the cover of Newhouse’s publications. This book traces the careers of Wintour and Brown and shows how they and the Condé Nast media empire were major media enablers in the rise of Donald Trump and Hollywood mogul Harvey Weinstein.

At its heart, All That Glitters is a parable about the changes in America’s media, where corruption and easy compromises are sprinkled with glitter, power, and glory. Originally titled Newhouse, this revised and updated edition, with a new introduction and afterword, won the 1994 Frank Luther Mott Award for best researched media book of the year.
Email Post
Labels: All That Glitters Anna Wintour Bravo Conde Nast Donald Trump Harvey Weinstein Newhouse Thomas Maier Tina Brown Vanity Fair Vogue