Mafia Spies -- a new dedication for two friends who passed away last year.

The new paperback edition of MAFIA SPIES has a new dedication too. It's in memory of two of my oldest friends in journalism, Rev. Ray A. Schroth, SJ, and New York Times columnist, Jim Dwyer, both of who passed away in 2020. Ray was the one who suggested that I recruit Jim to the student paper at Fordham when we were both teenagers in the Bronx. Ray was a tremendous teacher and a great influence on both of us. Ray wrote for Commonweal and America and authored several books, including one on CBS legend Eric Sevareid. When we were still undergrads, Ray took us both to a Silurians event and I remember being thrilled how grown-up it felt. Ray recommended that both Jim and I go to Columbia Journalism School. And of course, Jim won two Pulitzers at Newsday, where I have spent 37 years. This photo below was taken a few years ago when we both won national Sigma Delta Chi awards at the National Press Club and we posed for this photo with Newsday owner Pat Dolan. It was one of many great nights spent with Jim and friends. In 2019, when Mafia Spies debuted, Jim was one of my friends who came to the book party at the Spyscape Museum in Manhattan, four decades after meeting both him and Ray at Fordham in the Bronx. This new dedication is only a small reminder how much I admired and treasured both of them. 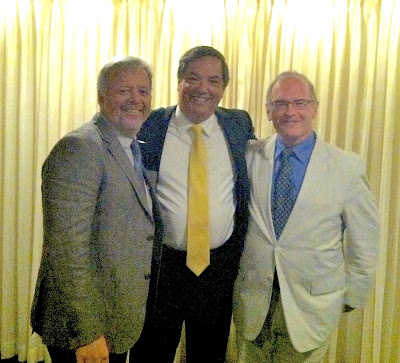