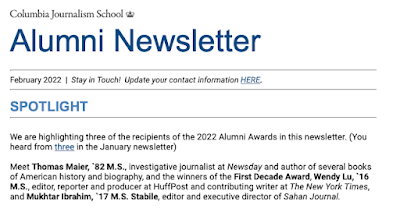 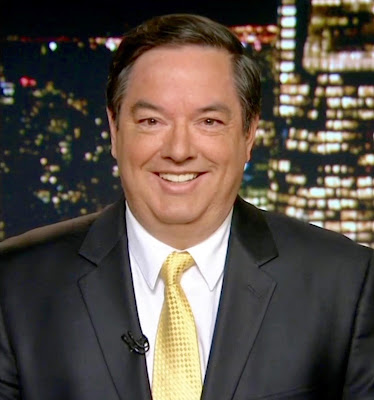 Alumni Newsletter February 2022 SPOTLIGHT We are highlighting three of the recipients of the 2022 Alumni Awards in this newsletter. (You heard from three in the January newsletter) Meet Thomas Maier, `82 M.S., investigative journalist at Newsday and author of several books of American history and biography, and the winners of the First Decade Award, Wendy Lu, `16 M.S., editor, reporter and producer at HuffPost and contributing writer at The New York Times, and Mukhtar Ibrahim, `17 M.S. Stabile, editor and executive director of Sahan Journal Thomas Maier `82 1: What is your favorite memory of the J-School? It was thrilling on the first day to walk through the J-School’s entrance, full of hope and ambitions, and then ascend the stairs to a place aptly called “The World Room.” I am the first in my family to go to college, so entering Columbia, the world’s most renowned journalism school, felt like an unforgettable dream come true. But my most memorable time was in filming a documentary about organized crime at the old Fulton Fish Market. It was both fun and a bit dangerous. Our motley crew Columbia would meet at dawn, drive my old 1975 Chevy to the cobblestoned streets around the market and then ask the fishmongers about the wise guys who controlled their corrupt market. The sights, the smells, the drama! At graduation, I won the John M. Patterson Award for that documentary, which we sold to Joan Konner, then at Channel 13 and later dean of the J-School. I came to Columbia as a print reporter from a small paper in Nyack, NY, without any television experience, and I wound up learning a whole new set of skills that influenced my career for the next 40 years. 2. Which story or project are you most proud of and why? While I’m very proud of my Newsday investigative reporting, the biggest challenge has been to write six books about America and our times. This includes biographies of Dr. Benjamin Spock, the pediatrician and popularizer of Freud through his famous baby book; the Newhouse family’s Conde Nast media empire and the impact of the celebrity culture on our politics, notably the rise of Donald Trump; and a biography of sex researchers Masters and Johnson, adapted into an Emmy-winning Showtime television series. But I’m most proud of my trilogy of books about the Kennedy era. The first book, in 2003, explored how the Kennedy family’s Irish Catholic immigrant background impacted their public and private lives. The second in 2014, When Lions Roar, explored the little-known relationship of the Kennedys and Churchills, and was excerpted in Time.com and featured at a JFK Library seminar. And the third, a 2019 book called Mafia Spies , looked at the CIA during the Kennedy administration and its undeclared war run out of Florida against Castro’s Cuba, which included the use of organized crime figures. I traveled to Ireland, England and Cuba with these Kennedy books. Overall, I think these books redefine our understanding of the Kennedy story – not as a “Camelot” fantasy but rather as very influenced by their minority background, as JFK defined in his little-known book A Nation of Immigrants. That book led to the passage of the1965 Immigration Act, which greatly changed the America we live in today and is the Kennedy family’s greatest legacy. 3. What advice would you give to the next generation of J-Schoolers? Two words: character and fluency. First, be able to translate your work into as many diverse platforms as possible – a multimedia “fluency” if you will – which is essential to the future. Today, I think being able to edit video and know the grammar of visual storytelling is as important as being able to type on a computer (or a manual typewriter!) was back in the 20th century. However, the importance of character transcends skills. It is crucial to intellectual honesty and a fearless presentation of facts. As an investigative reporter, you learn quickly how important character is to truth-telling – exploring the world as you find it without preconceived bias or ideology – and how things can go terribly wrong without it. Character teaches you to stand up to personal threats or legal challenges, to champion the rights of those less fortunate without power or money, and to force your news organization to publish when the cowardice of editors and publishers prefers that your story go away. Character isn’t something you’ll see in your paycheck but rather in the mirror. Character is essential to good journalism and a world in desperate need of it. Being a journalist – a witness to the world – is arguably the most noble calling of all.
Email Post
Labels: Alumni Award Columbia J-School Columbia Journalism School Dr. Spock Mafia Spies Masters of Sex Newsday Thomas Maier When Lions Roar