The Godfather 50th Anniversary -- A documentary and 5,000-word Newsday story about the classic film's NY roots

Coming this Sunday, I've written a 5,000-word story and put together a narrated documentary about the Long Island roots of The Godfather, the classic 1972 film celebrating its 50th anniversary next month. You can see it online now: https://www.newsday.com/entertainment/movies/godfather-movie-long-island-1.50513526 My story focuses on how Mario Puzo, a Long Island novelist, put together the fictional saga of Don Vito Corleone and his family, and how director Francis Ford Coppola first learned to direct by putting on shows at Hofstra University. Their unique collaboration -- translating a book into a film -- is what fascinated me. Two years ago, I wrote MAFIA SPIES -- the true story about two gansters hired by CIA to kill Cuba's Fidel Castro during the Cold War -- and it inspired my thought to do this piece about THE GODFATHER. There's, of course, an "investigative" finding that reveals something most people dont know about the infamous horse head scene. And a little-known piece of Newsday's own history too! It was a lot of fun to research and film with our Newsday team. Hope you enjoy! 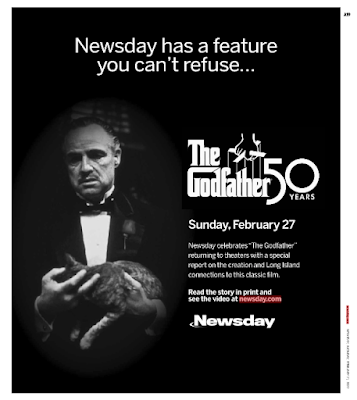